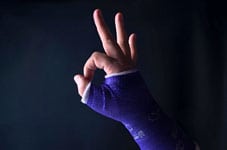 He was on his way to work, traveling his usual route, and as he approached a cul de sac street on his right, another driver, while stopped at a stop sign “didn’t see him” and pulled out directly in front of him to make a left turn.

As a result my client was unable to avoid the front of the other vehicle and sustained serious injuries to his arm, shoulder and hip.

Fortunately for my client, there was a trash truck driver waiting on the same street who had stopped in order to make a turn into the cul de sac and who witnessed the entire accident. He was listed on the police report and provided an excellent statement that based on his observation the collision was 100% the fault of the driver who pulled from the stop sign.

Subsequent to the collision, my client was taken to the hospital where he remained for several days of observation and was ultimately referred to the Rothman Institute for the injuries to his arm.

After multiple visits to several doctors at the Rothman Institute, my client underwent arthroscopic surgery to his right elbow to clean out and repair the damage that had been caused by the motorcycle accident.

Any Case Can End Up in Court or Abritration

No matter how obvious the liability may seem, even if the insurance company initially agrees that they are responsible for the accident, if a settlement is not reached, they are completely within their rights to argue the liability at the time of the arbitration/jury trial.

Even though her liability seemed clear, in that the defendant was facing a posted stop sign and never saw my client coming toward her, and there was an eyewitness who observed the entire collision, she still refused to accept responsibility.

Therefore State Farm’s total offer, including the healthcare liens, lost wages, out-of-pocket expenses and the various categories which make up an award for the motorcycle accident pain and suffering was $65,000 and they refused to go any higher.

As a result a motorcycle accident lawsuit was filed and after the discovery period ended, the defense attorney and I were able to reach an agreement whereby instead of going to a jury trial, we would arbitrate this matter as a binding high-low arbitration with $50,000 being the low parameter and $250,000 being the high parameter.

The arbitration took place at the Bucks County Bar Association and included hearing testimony from:

After a full day of arbitration the arbitration panel of three members eventually awarded my client just under $225,000 which was binding.

Needless to say, he and his wife were very pleased.

The reconstructionist went to the scene, took video and still-photographs and eventually produced a report concluding that the defendant was 100% the cause of the accident and this was also presented at the time of the accident. All at no cost to the client, because they hired me as their attorney.