Riding a Motorcycle: Does It Make You Smarter?

You are here: Home / Motorcycle Accident FAQ / Riding a Motorcycle: Does It Make You Smarter?

I recently came across a study from 2012 that demonstrates a concept that’s right up there with our dreams of heart-healthy bacon, and light beer that isn’t watery and disgusting: riding a motorcycle may make you smarter (not just sexier – no need for a study to prove that). 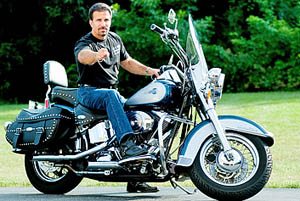 As you know if you are a regular reader of my blog, one of the reasons I became a PA motorcycle accident lawyer is because I love to ride.

One of the reasons I love to ride so much is that afterwards, my senses are heightened, I feel more alert, and more in tune with my surroundings – smarter in other words. It turns out I’m not just imagining these effects.

And while this theory sounds sort of crazy on its surface, there is some interesting science backing it up.

The study was led by Dr. Ryuta Kawashima for the University of Tokyo, and involved motorcycle riders between the ages of 40 and 50 who rode their bikes to work every day for two months in a row.

The study showed improved processing of thought, speech, and memory when compared to a control group of ex-riders who had not ridden within the last 10 years.

Dr. Kawashima is a well-known neurologist who developed a popular series of brain training games called “How Old is Your Brain?”

He had the participants ride motorcycle courses under varying conditions, including hairpin turns, curves, steep hills, poor road conditions and more, while monitoring their brain activities.

The data demonstrated that riders and ex-riders use their brains very differently. Those who regularly ride had improved cognitive abilities, particularly memory and spatial reasoning capacity.

The scientists theorized that the extra concentration needed to operate a motorcycle contribute to enhanced overall brain activity.

My experience as a motorcycle accident attorney has always led me to intuitively suspect that this was the case, but it’s still gratifying to see the evidence. I have my own theory as to why.

Riding your motorcycle is like pumping iron for your brain

Here’s another interesting fact (but an unsurprising one given what I wrote in the previous paragraph): driving a car does not have the same effect on your smarts.

Dr. Kawashima felt that the relative comfort and lack of challenges involved in driving a car does not force us to work our brains as hard, and so would not contribute the same benefits on the other end of the equation.

Think of it in the same terms as you would physical fitness: to improve your coordination and strength, you have to challenge your muscles with increased weight or more reps.

As an added bonus, riders revealed on surveys distributed after the study that they also felt less stressed and mentally sharper (also similar to the results of a physical workout).

Because bikers are so smart, I know I don’t need to define that for you: the study was funded in part by Yamaha. Now it’s pretty obvious why they would want to get in on this.

But the fact that they partnered with both the University of Tokyo, and with the Kawashima Laboratory at the Department of Functional Brain Imaging, Institute of Development, Aging and Cancer at Tohoku University, gives the study more credibility than it would have if it were only the company funding obviously self-serving research.

So, it turns out that it isn’t just saving money on gas and lower insurance costs that makes you seem smarter for riding your bike.

The elevated level of alertness and attention required to do it safely actually makes you measurably smarter.

With your new found smarts, it is a no-brainer to contact Pennsylvania motorcycle accident lawyer Lee D. Gaber right now at 1-888-292-5352 to review your case, which is free and confidential.